In the past decade, millennials have become the “most researched generation in history.” They stormed the generational field with their vast knowledge and willingness to adopt an array of new technologies and social media, encouraging marketers to decode the best Gen Y communication tactics. Millennials are trailblazers in new media, but their haughty, technological reign may soon come to an end as Generation Z moves in.

A recent report by Sparks & Honey dives into Gen Z and how individuals under the age of 18 are beginning to shift the millennial mindset into something new. Of the findings, the following are a sampling of Gen Z’s mindset, behavior and surrounds:

So how should marketers communicate with this generation? Here are a few of the suggestions in the Sparks & Honey report:

Although Gen Z may appear similar to millennials, they are taking Gen Y’s behaviors to the next level. With this next level of digital communication, brands will need to alter their story-telling tactics to create and gain loyalty among this young and impressionable generation.

Millennials are receiving a lot of attention these days.  They’re reportedly self-centered, entitled and can’t survive without technology.  And while Facebook usage is waning among the generation thanks to instant-gratification platforms such as Snapchat, what about older generations?

Both of my grandmothers – proud baby boomers – are on Facebook, use a computer daily and one even has an iPhone (gasp!).  They often comment about how they cannot keep up with technology, but in my opinion, they’re doing pretty well.

And according to a new study by Mashable and Statista, several technologies millennials may view as archaic are vastly prevalent among boomers – but they’re also adapting rather quickly to new tech.

While basic cell phones, desktop computers and VCRs are more popular among individuals 65 and older, they’re catching up to millennial youngsters in tablet and eBook reader usage.  Further, as millennials adapt to video streaming services, cable television companies may have to adjust marketing efforts toward older generations.

Candy Crush Saga is an addictively simple game that challenges players to match three or more pieces of candy in a row.  That’s it…well except for the seemingly never-ending number of levels (as of now, there are 385).  Further, the game has integrated pay-to-play technology that allows users to make in-app purchases to continue playing or buy booster candies.

Candy Crush by the Numbers

Why does this matter?

Many mobile apps hit a popularity peak, and struggle to sustain that popularity.  Candy Crush, on the other hand, has steadily been increasing in popularity since it’s launch in April 2012, and shows no sign of slowing down.

What does this mean for brands?

As of June 2013, there were 900,000 apps available in the iTunes app store. So how is it possible to know which apps can help drive marketing efforts and which are a waste of time?

The answer: “APPtitude” — a new feature by TPN’s Millennial Minute that will highlight the latest and greatest apps, app news and how each can tie into retail marketing efforts.

Instagram launched in 2011 as the iPhone version of a classic Polaroid camera. Most of you probably downloaded it. Or, your kids did. Facebook recently bought the app and last week it launched a new feature that allows users to take short, 15-second videos, in addition to photos.

Why does this matter?

Earlier this year, Twitter launched Vine, the first app of its kind that allowed users to upload six-second videos. As a user of Vine, I’m not overly impressed. It lacks features to create videos truly worth sharing.

Instagram’s new video feature is essentially the same concept, but has quickly blown Vine out of the water. Here’s why:

What does this mean for brands?

Brands have just started to discover ways to connect with their audiences through Vine, but Instagram provides an already-established user base, cutting out a huge portion of the work required when connecting to audiences through social media.

Further, Instagram already established itself as a lifestyle-focused app, giving brands the ability to connect with audiences on a very unique level. The addition of video will simply extend the ways in which brands build meaningful social relationships.

No, you don’t actually go blind. But Bloomberg reports that recent studies show that as we check our phones in-store, all of those colorful attention-getters that we design are being glossed over:

These days, consumers are more likely to send a quick text and check their Facebook feed than to read a magazine or develop a momentary craving for the gum or candy on display. That has spurred companies such as Hearst Corp. and the Coca-Cola Co. (KO) to reconsider how they showcase their wares in supermarkets.

For years, publishers could count on bored shoppers waiting in the checkout line to pick up a magazine.

Hearst, which sells 15 percent of its U.S. magazines at retailers, is adding cardboard displays in places other than the checkout line.

“We avoid the dreaded cell phone at checkout,” said John Loughlin, general manager of Hearst’s magazine unit, which includes titles such as Cosmopolitan, Seventeen and Esquire. “Magazines are an impulse purchase, so we have more than one opportunity to capture the consumer’s attention.”

The problem has worsened in the past 18 months, as more than half of all Americans now carry smartphones, Loughlin said.

Check out the rest of the bad news here.

Apple’s September 12 product launch event was everything you’d expect from a movie promotion — complete with leaks, trailers and a very active rumor mill.
While the iPhone 5 may not be THE shiniest new smartphone in 2012, it’s still an amazing feat of engineering. The device also marks a new era for Apple, who will still have a significant impact on retailers and brands for the foreseeable future. Here’s my take on what iPhone 5 means to the digital marketing industry:
The lack of NFC wasn’t an oversight. Apple knows what it’s doing when it comes to anticipating or creating a marketplace need. They’re taking the long view — that the mobile commerce industry still needs time to mature, despite the fact that Samsung and Nokia have been selling tons of NFC phones. But Apple knows the dirty little secret:  today’s shopper doesn’t really care about NFC. Until there’s a victor in the m-commerce war between heavyweights like Google Wallet, Isis, PayPal and Square, there’s still no real industry standard. 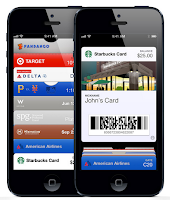 The safe bet is that Apple will sit out the NFC war until there’s a clear winner, then move into the market with guns blazing. Even Starbuck’s partnership with Square provides a way to pay without NFC, so there’s still some life left in the art of scanning a bar code from your mobile … which brings me to Passbook:

“Your boarding passes, movie tickets, retail coupons, loyalty cards, and more are now all in one place. With Passbook, you can scan your iPhone or iPod touch to check in for a flight, get into a movie, and redeem a coupon.”

Passbook is Apple’s approach for going around NFC by creating an intuitive experience that combines ambient location-based services with loyalty programs. They’re betting that iPhone users will allow marketers to push information (tickets, coupons, etc.) to them at the moment they need it. It’s Apple’s trademark: Make it easy fun and easy use, and people will want it.
My shoulders sag a bit every time I’m offered the chance to join a reward program that involves scribbling out my information on a paper form or being handed a plastic loyalty card or paper-punch card.
Aren’t we well into the 21st century at this point?
Better to offer nothing to your customer than another rewards card that goes into her wallet or on her key ring. Yes, paper-punch cards are simple to print. And yes, we’re very used to carrying plastic cards. But we already average 10 or more, and don’t want any more clutter.

I bet most shoppers prefer to use their phone number instead of sifting through their key ring or wallet anyway. And that’s a good start. The bigger prize, however, lies in having a more active conversation with your customer. And for that, you need to be on her smartphone.
If you’re not ready or equipped to go it on your own and develop your own app, consider offering your rewards card through KeyRingTM, a nifty smartphone app that does all the heavy lifting for the retailer. And Apple’s upcoming “Passbook” app looks promising too.
For those retailers more inclined to DIY, Krogerand Safeway each have developed fairly robust mobile apps that allow users to review specials.